You are here: Home / Mobile News / Stories Behind the Apps – WittyLater

Tell us about being WittyLater!

WittyLater was the natural choice for our inaugural app. It perfectly demonstrates our sense of humour, it allows us to use unusual words like “jape”, and it even let us make up a word (kaflabble) when we couldn’t think of a word to describe a completely jokey and non-serious argument.

Every time I’ve talked to someone about the app, the look of excitement they get when they understand the concept has acted as a way to re-assure me that I choose correctly when I was deciding which of our many ideas to create first. 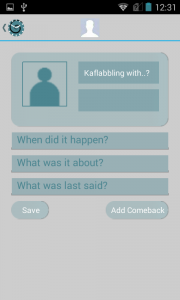 The best thing about WittyLater is that it has a fantastic elevator pitch. Everyone has had the experience of being unable to think of a witty comeback during a discussion, and everyone knows the slightly disappointing feeling when they think up the perfect line later on, when it’s too late to use use. In normal circumstances, their sparkling wit would go unused, lost and forgotten in an instant. WittyLater allows you to be witty… later. You can use it to tag the friend that you were kaflabbling with. If you want to, you can add in the context of the discussion (what it’s about, when it happened, and what thing to be said was). After that, simply add your Comeback and post it to Facebook, or save the details for later if you want a bit more time to think up the perfect response. WittyLater will even retrieve the number of likes that the post has, so you can see if you really are as witty as you think.

How is your app different from similar apps?

The essence of WittyLater is very simple. You log in to Facebook and it remembers past arguments that you lost because you couldn’t think up a witty comeback. When you do think of a comeback, WittyLater lets you post it to Facebook so everyone can see how clever you are. It’s different from competitors because, as far as I’m aware, there are no other apps or services that do the same thing. Before I started development I searched for any product that does the same thing, or something similar, and I was surprised to find no results. It seemed like such a simple idea that I thought someone would have done it already, but I guess it’s so simple that it didn’t occur to anyone else. 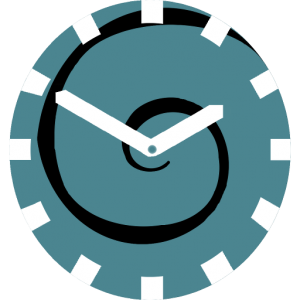 What went into the design and UI?

The user interface for WittyLater was pretty simple to create. It took so long to develop that I got a really good feeling for what UI items should go where, and it was easy to change things around as the app progressed. Once development was finished, I spent a few days creating a consistent design and cleaning up a few place holder assets.

The icon was partly luck. I knew I wanted a clock to represent the concept of “later”. Originally I was going to have a clockwise arrow on the clock face, but I was playing around with some settings and it turned into a spiral. I liked it, so I kept it, and I think the overall design came out as clear and memorable.

What tools did you use in building the app?

My setup is fairly standard for Android app development. I use Eclipse with the Android Development Toolkit and a Subversion plugin to sync everything to a central server. Google’s Android Support Library V4 aids in backward compatibility between phone versions and the fantastic ActionBarSherlock library from Jake Wharton has been invaluable for ensuring that my app looks the same on every device.

StackOverflow is a question and answer community for programmers, and it’s saved me a lot of time while developing the app by helping me find solutions to some of the more difficult problems that I found.

As for the people who have helped, the other members of the CGFIndies team have been enormously supportive. They’ve helped to keep me on track, talked through ideas with me, and provide a non-programmer perspective that’s helped me to look at concepts in new ways. 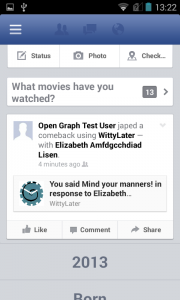 What lessons did you learn during this process?

Since WittyLater is my first app, it’s fair to say that I learnt everything required to make an app from these resources. I was a web developer before I decided I wanted to try app development, and the transition wasn’t as easy as I had hoped. I had to learn the Java programming language, the Android SDK, the Facebook SDK, and device compatibility.

One specific thing that I learnt from browsing StackOverflow is that Facebook would need to review my app before I could use their APIs with the general public, and that a lot of people had found their app rejected the first time they submitted it. Because of this, after I submitted WittyLater for review I joked with the team that I was just waiting for Facebook to reject it so that I could make a tiny change and get it passed. This was closer to the mark than I had thought it would be, because the first review failed with a message asking me to submit the instructions in English. Since English is the only language I speak the instructions were in English, so I added some white space to them and re-submitted WittyLater for review with a message saying “These instructions, like the last ones, are in English”. It passed without issue and I was left rather puzzled and very relieved.

A common problem among indie developers is focussing too much on work, which often results in burnout. I found this happening to me, but when I tried to set aside time for relaxation I found that the mentality of “I’ll just finish one more task” quickly ate into this time and I was back at square 1. I’ve recently come up with a novel way of handling this. I started up a Youtube channel. Because I made a commitment to produce two videos a week, it feels like “work”, so it’s easier for me to rationalise taking time away from development to do it. The end result is that I now have about two days a week that is spent playing games and editing videos, and I’m feeling much more productive overall.

What went right and wrong with the release?

I think that WittyLater stayed true to the core idea throughout development. It didn’t stray too far from what it was supposed to be, and it didn’t suffer from feature creep. There’s still some room for improvement, particularly with the design, and there’s some features that I would like to add if I get time to work on it further, but overall I’m very happy with it. There are, however, a lot of things about the WittyLater development that I plan to improve on for our next project. An initial development time-scale of 3 months turned into a shocking 18 months. The reason for this neatly encloses all of the other problems that I faced.

First off, learning the various quirks of the Android and Facebook SDKs took far, far, longer than I expected. Now that I’m more familiar with the processes and workarounds, and now that I have some reusable code in place, the next app should be a lot easier to get off the ground.

The next problem was that I left all automated testing until the end. I had been doing manual testing throughout development, but automated unit testing can help catch unusual errors and ensures that future changes don’t break previous functionality. I came across some limitations with the Android testing tools, as well as the Facebook testing tools, which made the testing take far longer than I had planned in. I was tempted to forget about the unit testing several times, but I’m glad I stuck with it because I found a lot of bugs that I wouldn’t have found through manual testing. Next time, I plan to take use the test driven development methodology, where the tests for each feature are created before the code is written. This will mean that the app is fully tested all the way along, and I can release as soon as development is finished.

Who is on the team and what are your roles?

I’m Tom, and I’m currently the only member of the team working at CGFIndies full-time. I’m trying to do as much as possible, including the development, assets, social media, and promotion. Also on the team are Alex, Ben, James, and Joey.

Alex and Ben are both focussed on content. They help me work out ideas, tell me what doesn’t work, provide a different perspective, and they’ll also be doing a lot of the concepts and story when we get onto more in-depth apps and games.

James is our artist, although with WittyLater I wanted to create all of the assets myself to gain some experience. Joey is our resident media expert, giving advice on everything to do with audio and videos. This will be particularly helpful when we start promoting our future projects.

What were you doing prior to creating WittyLater?

As I mentioned above, I was a web developer before deciding I wanted to try something new. I got to a point where I was a bit bored with creating things for other people and I wanted to be able to point at something and go “That there, I made that”. I think that I’ve achieved that with WittyLater, even if it doesn’t make me a millionaire. The rest of the team are still have their own jobs. They help me out whenever they have time.

What other apps inspire you?  Right now, I’m semi-addicted to Temple Run. Endless runners have always had an attraction for me, because if I fail it’s because I wasn’t good enough. There’s always room to improve. I also really like Alarm Clock Xtreme. It does one job very well, which I think more apps should aspire to.

Although not an app, I’m inspired by the PC version of Minecraft. It stands out as a shining example of what is possible as an indie dev, and also how to do early access in the right way.

Hit the ground running with a minimalist look. Learn More